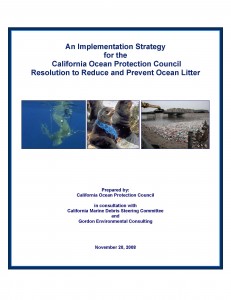 Marine debris is one of our most critical ocean issues to address. As a project manager at the Ocean Protection Council, I was tasked with completing the implementation strategy of how California could reduce and prevent marine debris. The strategy called for 16 recommendations that required either legislation, regulation or new incentives to enforce existing laws. I presented the strategy to the OPC in November 2008 for their approval and endorsement and published an article in Coast and Ocean about it in January 2009.

The strategy targeted some industries that focused on single-use products, such as plastic bags. The plastics industry vigorously objects to being part of the marine debris problem despite overwhelming amounts of plastics found in the ocean. The controversy surrounding the strategy and how consumers would be affected led to widespread media coverage throughout California, and I was interviewed by radio and TV outlets. The strategy has been used by numerous local and county jurisdictions to guide new marine debris regulations. The state Legislature has also cited the strategy in many bills addressing marine debris, although none have yet passed. Other states and non-governmental organizations (e.g., Surfrider Foundation) have also used the strategy to develop their own approaches to reducing and preventing marine debris.