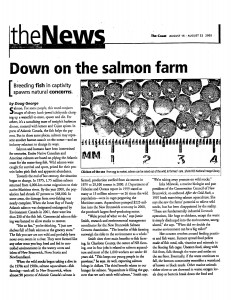 In 2002, salmon aquaculture was already a viable industry in Nova Scotia. Yet the environmental costs of industrialized fish farming were just emerging. I was asked by a local newspaper in Halifax (The Coast) to write an article about the impacts from the methods used by the farmers and the risks to consumers. On a regional scale, the spotlight on the fish farming methods prompted other media outlets to produce their own investigations, and the increased scrutiny generated replies from the industry and community. It is now common across the US and Canada to hear consumers seek out sustainably caught wild salmon even while the industry has continued to work toward improvements.